Ben Winubst and I off for a climb of Kehu via the Begley. This is one of my all time climb favorites in Nelson Lakes National Park. Perfect weather and climb conditions.
Trip Times

A Map of the wander 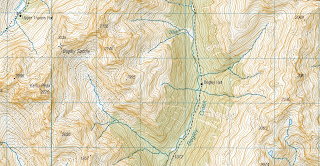 Nelson section of the NZAC Queens Birthday weekend trip is in Arthurs Pass National Park with the aim to climb Mt Franklin (2145m). Eight of us.
Friday 01/06/2001
Met up with Paul Hanson in Nelson, headed to Greymouth at two o'clock and arrived there just on six. Stopped for a pizza and coffee then on again to Otira, arriving there at eight thirty. Staying the night at the Otira pub for $15 each. Had a few beers then off to bed.

Saturday 02/06/2001
A cold morning with the frost freezing the pubs water supply. We left at 0650 and drove to Morrison bridge, helped with transport obtained from the publican. Started walking at 0730. A bit of a cold wet  foot slog up the river, got to Deception hut at 1215. We lunched at the base of the shingle slide.
We headed up the slide and then headed left to a saddle, up a slow slope probably the beer last night.
Then it was a traverse to the basin under Franklin, this is when we tooled up with crampons and axes.
Arrived at 1600ish in a basin below Lake Anna beside a creek in a meter of snow. Set up camp in the snow.

0820 Dave fell off a buttress really early in the climb. We had gone up the valley and found a gulley to go up so we would have an interesting time. We had a 20-30meter snow gully and then a sloping shelf to a steeper gulley.

Ben and Andrew stayed with Dave, Kim and I ran off to Goat Pass hut to use the radio there to request assistance.

0850 Left to get help.
1050 Got to Goat pass hut, radioed for help, waiting for helicopter. Kim headed to Deception hut.
1120 DOC says helicopter should arrive here about 1200.
1200 Helicopter arrived, they dropped off gear, got position, took off for a looksee. When the helicopter arrived back I got smacked in the head by heavy metal step; as I assumed it would not fly up from the wash.
Chopper headed off and got Dave - came back, loaded  gear and put Dave on a stretcher and then off to Christchurch.We had some fun with rock fall where the scree gives access to the basin.
At Deception hut for the night, slept in the tent with no fly, all good.

Monday 04/06/2001
We left at nine and where out by lunchtime, took approximately three hours. A fast blast. Had a beer each and then headed home. Back in Nelson by five thirty.

Friday 23/02/2001
Drove from Nelson to Totranui, in the Able Tasman National Park, and set up camp for a couple of days of relaxation, with a few other families.

Saturday 24/02/2001
With Barney I did a day walk to Seperation Point and we visited the old homestead now a DOC facility called Whariwharangi Hut.