Bill and I go for a day walk to the top of Mt Holdsworth in the Tararua's with an early start from Wellington. Hit it just right as its a day of no wind and not much cloud at all. 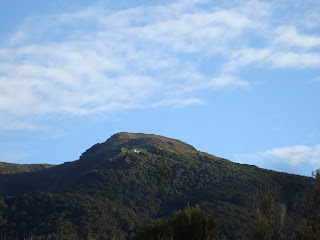 Up into the open and a view back onto the forest of trees. 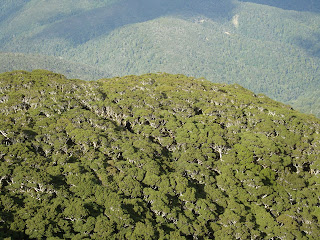 Got up the top and sat in the sun for a lunch break. Was able to boil up some coffee in the open, no wind at all. The survey mark on the top of Mt. Holdsworth. 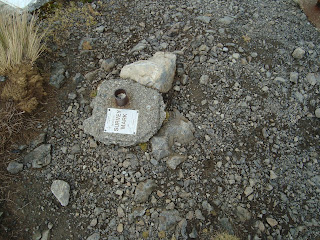 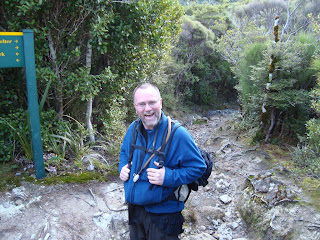 There are still the older wooden signs, not yet replaced with the concrete anchored green metal ones... 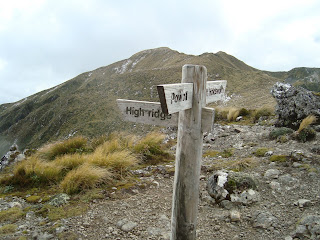 Eventually all these non decayed functional signs will be gone. Some of the Tararua tops look like weirdo hedgehogs with sparse blue spines and a smattering of green tumors. I wonder if I can order some DOC style signage to create a bit of mayhem?


Map of the walk
This is from Top50 maps BP33 Featherston and BP34 Masterton: 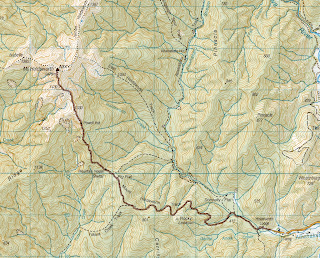 A solo night walk to check on the opussums, snails, wetas, and earthworms.

Friday 13/05/2011
Left Wellington late and after stopping for a coffee at Mum and Dads on the way there was not many minutes of Friday night in the walk, just enough for the first kilometer across the farm.

Saturday 14/05/2011
0000 Was still walking Saturday morning and just got got into the trees and it was not raining. Saw four opussums and that was it; maybe they do not like the rain? There was one snail.

This was a fine day for walking with time being very strange; almost elastic as some minutes went by as days and some hours went by as seconds. The forest glowed and the trees grinned with each lightening strike.

Arrived at Te Matawai at 0453 wet right through.
Woke a bit too early so got the fire going to dry out my gear and went back to sleep.

We had planned a wet weather trip on the West side and in the bush. The weather that arrived was too good for a bush trip so Friday morning we swapped it for a top tour involving Dorset Ridge hut from the East side. Wasn't till we where leaving Upper Hutt that we realised we had no maps for this trip. BN33 and BP33 where in my pack, not BP34 and BN34. A drive around Upper Hutt looking for maps was a waste of time. Junk food, booze, and videos where available; no maps.
So it became a Carl and Ian track Not Maintained trip in the Taurarua's without maps. The plan was a circuit starting from Holdsworth Road end into Jumbo hut Friday night; then over Broken Axe Pinnacles and down into Dorset Creek from the Kings and back out via ridge to McGregor biv.

Friday 29/04/2011
We eventually got to Holdsworth Road end and headed off to Jumbo hut at ten to nine, stopping at Aitiwhakatu to remove a layer and leave trail crumbs in the hut book. Was a good fast trip and from road end to Jumbo was a wee bit less than three hours, and still plenty of time to take in the night life and fungi. 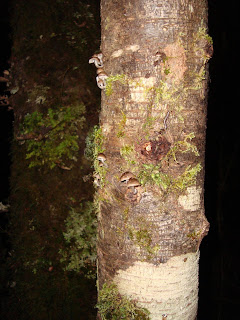 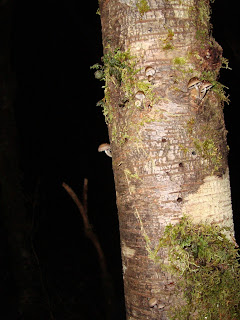 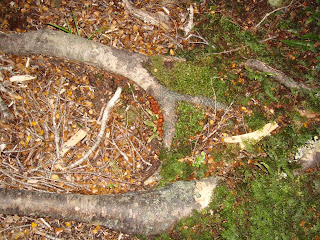 Saturday 30/04/2011
We had woken the hut occupants with our late arrival and they took it gracefully as when we mentioned we where map less they generously lent us their map. However the amount of snow on the tops changed the plan a few times. We left Jumbo and headed on up to Angle Knob getting into snow with conditions alternating between hard and soft. With no ice axes and wearing runners we decided to reverse the trip heading down to McGregor biv. Aiming to drop down the ridge into Dorset creek and up to Dorset hut for the night, and on Sunday returning the same way or going out up to North King and over the Broken Axe Pinacles. It was a clear sunny day with great views. 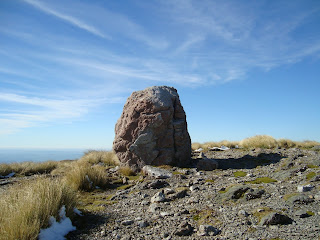 Girdlestone looked quite impressive with its dusting of snow. 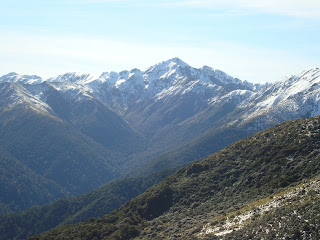 The tarn above McGregor biv. 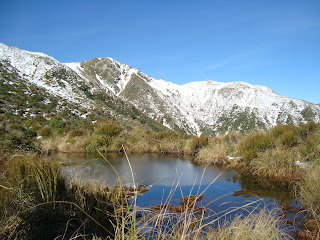 The track not maintained down to Dorset Creek took us longer as we wasted time looking for where others had gone. In the end we headed north and ended up in Dorset Creek above the bluffs. Instead of a gentle easy wander up a creek we encountered a deep raging slippery cold gorge. We had not factored in the massive snow melt. It took us a couple of hours to progress about a kilometer. A couple of places we had to climb up and traverse above bluffs as the creeks depth and current was not safe at all. This was one of those tramps that could easily turn to shit if the weather went bad. We found a flat spot and built a biv for the night out of punga ferns as we had no fly or mattresses.

Sunday 01/05/2011
It never rained in the night which was very pleasing as dawn allowed us to see the holes in our biv's roof. Cold for me as I had a lightweight summer sleeping bag, had expected to be in a warm hut. 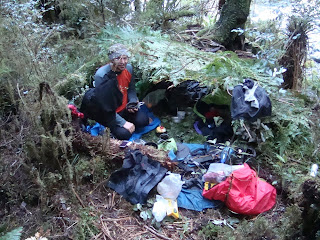 The walk back down Dorset creek was much easier than the day before as the level had dropped at least .5 of a meter. We did not have to go over bluffs and the current wasnt a worry. It was an easy relaxing walk back the way we had come. Even the navigation up to the old track was a breeze. Another example of the milipede, but this one in day light. It was probably dead. 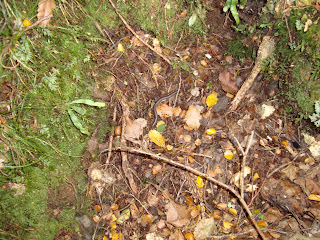 With grass this long we understand why its a Track Not Maintained. 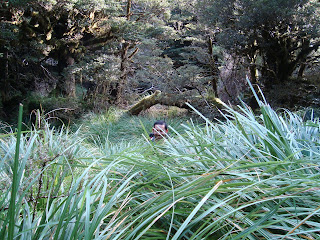 Here is another photo of Girdlestone showing how quick the snow has melted. 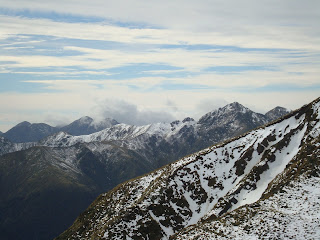 A view of the Broken Axe Pinacles with the Northerly coming on strong and a drop in temperature. We where glad to be getting off the tops. 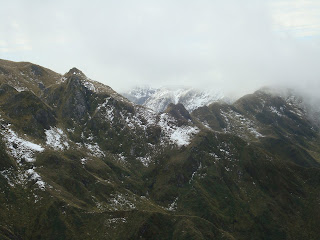 One last part was to return the map lent to us on our way home. We plan to do this in the summer when the water is low and the temperature more comfortable. Dorset creek is another of the amazing little gorges in the Tararua ranges.

Map of the Location


The Tidyup
On the way out there was a bit of trash at Atiwhakatu, its been removed and will soon be on its way back to the wee small minds that left it there.

Thank You Stuff
A big thank you to Ian for the loan of the map and the Tui when we dropped it off.