Again the trip was destined to not go as planned, the Nichols thing. This time the rain was excessive so we went for dry and warm rather than wet and cold.

The whisky for this trip was Springbank 15yo, a very enjoyable whisky.

Friday 27/09/2013
We headed off up the South Ohau even though it was a bit deeper and pushy than normal. Raining before we got to the hut and the river was getting dirty and rising. Took longer to get than the hut than expected, once there got a fire going and relaxed with a beer and whisky. 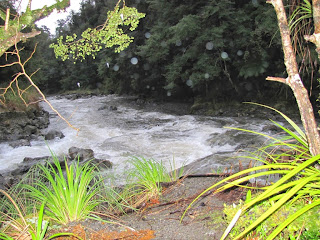 In the end we decided best to be going up the escape route, nice fungi back again.

Trip Times
Friday
1807 Left Poads Road
Fell in the river and drowned my small camera
Got to the hut quite late...
Saturday
A wander about day.
Sunday
Left hut and headed up escape route
Back at the car

This trip was planed to be a Poads Road to Nichols Hut return for the weekend. We planned on getting to TeMatawai hut early hours of Saturday morning, having a few hours sleep and then later in the day heading for Nichols for Saturday night. Full return on Sunday. We failed our aim and had a crazy fun trip.

Whisky was Lagavulin 16 yo. And no wee books to clean up after.

Friday 13/09/2013
We meet at Poads Road and headed off to walk to Te Matawai hut via South Ohau hut up the river. We got into the river but immediately realised it was too swift and deep so we aborted and headed off up Gables to Te Matawai. Sometime around 0330 Jessie lost the track and even though I could hear him whistling we did not meet up.

Saturday 14/09/2013
Eventually I headed to Te Matawai hut getting there some time after five and crashing out. It was a still dry evening and Jessie was will equipped so I expected we would get together tomorrow. A few hours later when it got light he arrived at the hut. Phew! Lots of sleeping and no plans to head to Nichols later.
Late afternoon we headed off to South Ohau. An enjoyable evening with that Islay whisky.