Picked Carl up from the airport and then went home and we got our gear ready and did a super market visit for the food and beer. Trip aim is the Sawtooth Ridge in the Ruahines. Left Wellington at five thirty and where happy that the traffic was smooth flowing. We stopped in Upper Hutt for fuel and as there was a bottle store next door we also grabbed a few miniatures of whisky and whiskey. At Masterton stopped and got pizza and chips, not such a good idea as later when we where walking up the hill to Longview it felt like a stomach full of cardboard and cement. Best whisky of the trip was Johnnie Walker Red? Very strange that a blend that makes me think of petrol would be so delicious; must be the setting.

Thursday 16/10/2014
After Norsewood Carl navigated us to the end of Kashmir road, where we had to use a GPS a few times to ensure we took the right road. As towards the end there where a few more roads than shown on the map, forestry stuff, and in the dark it was tricky deciding on the right road. Signs like this helped us know that we where in the right forest. If it was a bit smaller it would be fun to throw it in the car and swap it for a sign in the Tararua Forest park.
Parked up and packs on backs we headed off uphill in a bit of a chill wind, within five minutes of heading up we where down to one layer. About an hour later it flattened out and we saw this sign.
Five minutes later we where at Longview hut, a most luxurious hut with a gas heater and no problem getting Internet via Spark. Good views, food and beer.
Friday 17/10/2014
A relaxed start to a very fine day of open tops travel from Longview to Howletts hut.
Left the hut for an easy traverse to Pohangina Saddle then a gain of 300 meters to Otumore with views in every direction. Didnt splish splash splosh the sun cream and it wasnt till later realised got a bit burnt.
Heading mostly North with a bit of a dog leg, down and up to Taumatataua, then North East to Howletts hut along Daphne Ridge. Great hut this one, excellent work by Heretaunga  Tramping club; pity about the excessive do this do that stuff. If people are going to do stuff like leave a hut clean and tidy they will without signs; and the people who leave a mess, burn all the firewood, they ain't going to change their behavior by a reading a sign. A White and Mackay sign would make more sense; and wouldn't it be nice if club huts had mini bars. Just a little mini bar with a small selection of Scottish single malts. Wouldn't have to be much, fifteen year old's would be good, a Springbank, Highland Park, Glendronach, and a few Islay's.
My last visit to this hut in 1993 was also to do the Sawtooth ridge, never yet done it as I have always hit bad weather or deep soft snow. Probably do this same tramp again in a few months. And this is another good hut for Internet access via Spark.

Saturday 18/10/2014
Interior of Howletts hut.
Rain. Wind. No visibility. Complex decision tree to navigate made easier by internet access and getting latest weather data. However the predicted weather conditions of clearing, where only just predictions as the weather never did clear. This is the view before we left Howletts.
We dropped down to Daphne Hut thru the forest and saw one living cedar tree.
After a snack, we headed off to Tarn Biv and hoping for clear weather by the time we got there so we could sawtooth.


We just got to Tarn biv and it pissed down, so much for the forcast predication of clearing. Tarn biv is a comfortable biv with its two chairs, we where able to sit in comfort and have hot drinks.

Sunday 19/10/2014
A day of constant drizzle, heavy rain, and minor wind. Out down the river and then up the ridge and along almost to Longview and down to the car.
The walk across the tops was in rain and poor visibility, not too cold. Had me compass out just in case. Overall it was three and a half hours to the car. We skipped the Awatere hut visit as we wanted to get onto more substantial roads and not get stuck.

View Larger Topographic Map
Density
Of the four huts we visited only one contained density. At the end of our trip all four where density free. Have enough of these wee books that I'm now due a trip to return them to the bible Society in Wellington. Density removal from Nelson Lakes National Park, Mount Richmond Forest Park, Tararua Forest Park, and Ruahine Forest Park. 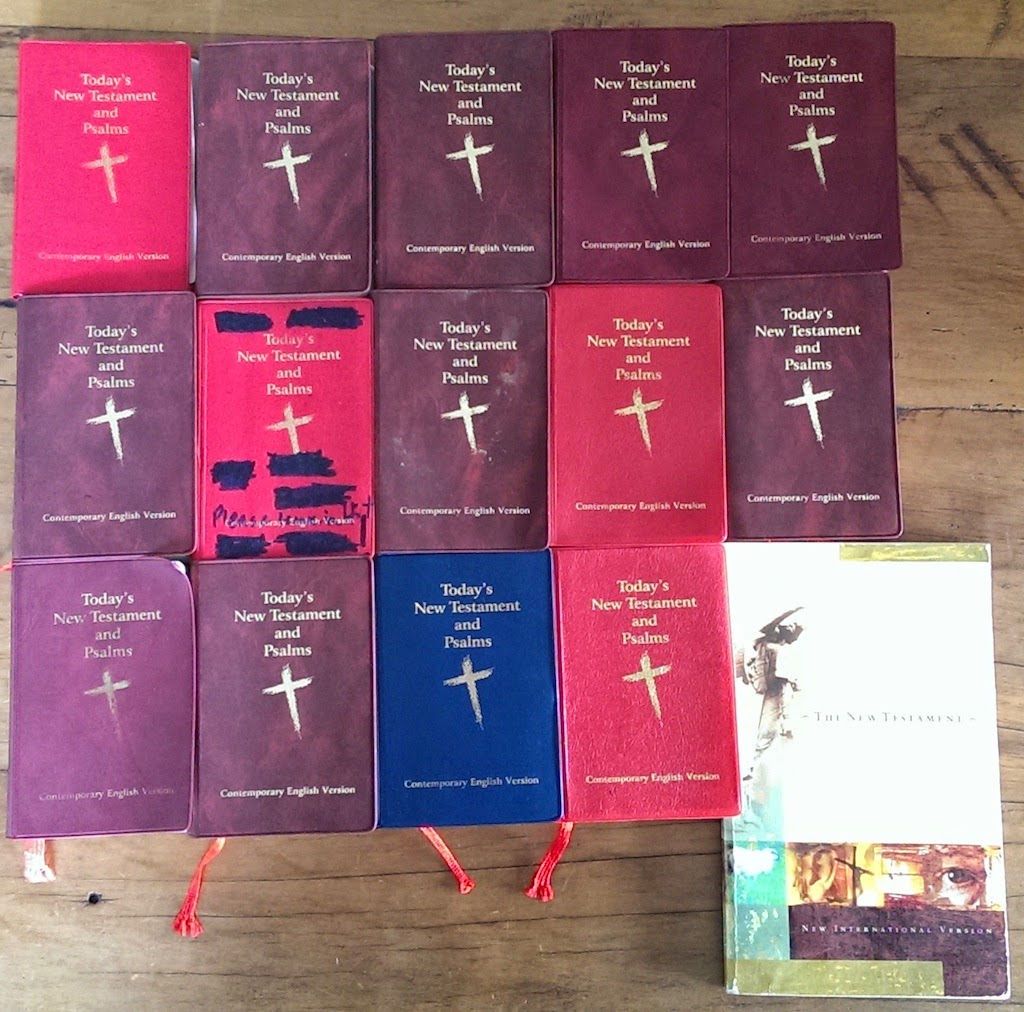 Paul and I on Friday evening drove to Putara road for a walk into Roaring Stag Lodge or Hut? We stopped in Carterton for Cafe Istanbul and saw Jessie there with a tramping club group who where heading in the same general direction. Also new a VUWTC trip was also heading there. 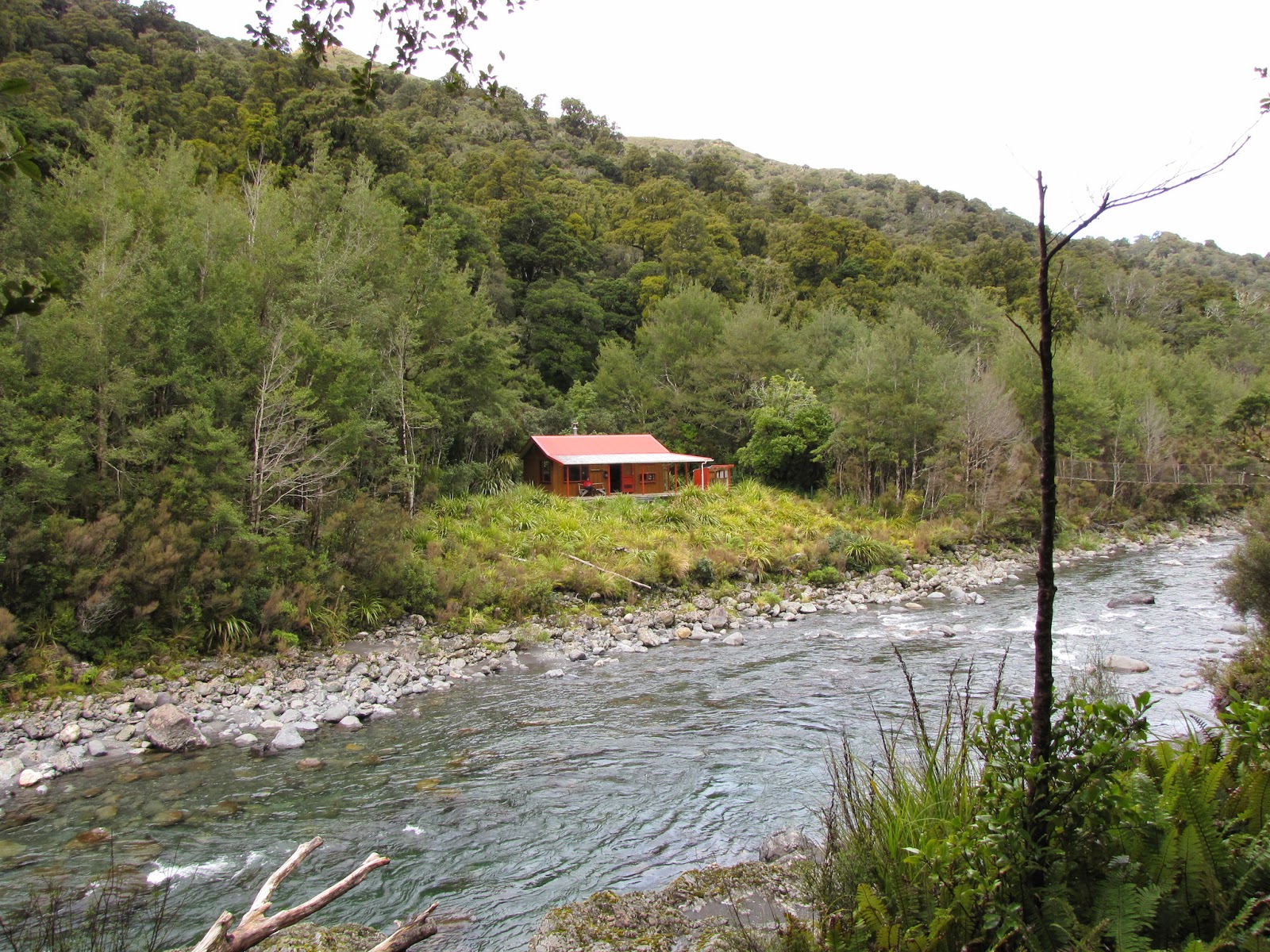 Then up the hill to check on Cattle Ridge Hut, saw a deer about ten minutes after crossing the river. Got to Cattle Ridge hut during a good hail down and it was even snowing a bit. No sign of the hut being improved or demolished.
Back to Roaring Stag hut and it was full, about sixteen people there for the night; including Tariga with the VUWTC. A warm hut and a relaxed evening with a few drams, after cooking my meal outside due to a full hut.

05/10/2014 Sunday
Nice sunny day for an easy walk out. Spent a few hours relaxing in the sunny spots along the river.
Roaring Stag Lodge or Roaring Stag Hut

View Larger Topographic Map
Density
There was one in Cattle Ridge hut, put there 15/09/2013, previously it had been in South Ohau hut 02/02/2013. I passed thru South Ohau 10/02/2013 and did a density recovery, looks like this is one that I previously returned. I wonder where I see it next.