This is the last walk of the year 2016, so taking a nice single malt that Carl gifted, for the Inland Track Abel Tasman National Park a 41km journey with Anthony and Jed.
The aim of this walk is to have an enjoyable wander along a track never visited and bag the four huts that we have not yet visited:
The other aim is always to clean the huts and ensure that there is no rubbish left behind.

We booked an Abel Tasman AquaTaxi to take us from Marahau to Totaranui, at a cost of NZ$46.00 per adult. From Totaranui it is a short walk (just a few hours) to Awapoto Hut where we hope to find bunk space for the night. The next day we walk to Castle Rock Hut and stay the night there.

Tuesday 27/12/2016
We get to Marahau by 0800 to prepare for the water taxi ride to Totaranui, had a few Atomic coffee's while we waited. Great long blacks where had.
The water taxi ride started with a tractor towing us down the road to the launching area, a bit congested with half a dozen other tractor and boat pairs.

It was a slow journey to Totaranui as the interesting bits along the way where checked out, took us X hours to get there. Once at Totaranui it was a chocolate bar each from the camp store, before our dusty journey up the gravel road to the inland track. The DOC people in the Office had no data on the Inland track, its like its in a whole other park somewhere far far away.
We spotted a derelict hut off the side of the road, not good enough to add to hut bagger's. Had a good look at it and if we had some sheets of iron when driving past could with some effort get this hut back into a functional state.
We stopped on the way to tape up Jed's feet as he got blisters, we then carried on to Pigeon Saddle and walked a way up the track before stopping for lunch. After much checking and discussion we decided to abandon the trip as Jed's feet would not like the trip. As can seen by skin state.
Back at Pigeon Saddle we had discussions and knew that we would have to camp the night at Totaranui and get a water taxi the next day. In the end I handed the whisky over to Anthony and headed off to Castle Rock hut and would meet Anthony and Jed at Marahau the following afternoon. The split of our party was all to do with my addiction to bagging huts, addictions like this cut thru everything, people become meaningless, life is utterly uninteresting unless there is a hut on the horizon. Wonder where the local Hut Bagger's Anonymous meetings are held? I reckon it should be Sir Robert Hut.
Now on my own I headed off back along the track we had just come from, a rather hot and dry afternoon. Heading for Castle Rock Hut for tonight, not Awapoto.
Arrived at Castle Rock Hut (not Castle Rocks Hut!) just after nine p.m. as it starting to get dark, just one person in the hut, Karl. On the walk so far I had only seen five people. Mentioned to Karl how I had not bought whisky and a dram would have been good. Problem solved he was carrying some bourbon so we shared a dram as we stood outside watching the milky way.

Inconsistent side ways blah 1: The Topo50 BP25 Motueka has a hut called Castle Rock Hut, and not far away is a feature called Castle Rocks. The DOC sign on the hut has "Castle Rocks Hut"! The DOCware calls the hut Castle Rocks Hut, while the DOC web site calls it Castle Rock Hut. New Zealand tramper also calls it Castle Rocks hut.
The NZMS260 map has Castle Rock, as does NZMS1 1979. Is it possible they have slipped the "s" in because they are confusing it with Castle Rocks hut on the West Coast or is it an enthusiastic sign writer? Hut Bagger NZ web site has it correct; for me this is the definitive source on NZ huts. So now there are not only bibles to remove from huts, there are also a few "s"'s to remove from signs and things.

Wednesday 28/12/2016
Awake finally and had a hut clean, and then visited the Castle Rocks look out area, a few minutes of a down and an up from the hut for a perch with a view. Texted Anthony that I should be at Marahau at about two p.m.
Back to Castle Rock hut for a cleanup and then headed off to Marahau. Stopped for a snack and drink at Holyoake Clearing Shelter.

Inconsistent side ways blah 2: DOC have some difficulties with the naming of Holyoake Clearing, as there is another bit of DOCware with an extra "s" slipped in. This sign is at the junction of the tracks to Anchorage and Tinline at end of Holyoake Clearing.
The sign at Castle Rock hut is correct like this:
Also DOC can't seem to understand that a hut is a hut and not a shelter. The Holyoake Clearing Shelter is built from DOC's "Standard Two Bunk Visitor Hut" design, and as such is a hut.
The views from the track leading down to Tinline Bay where a good end to the trip.
Got out to Marahau where Anthony and Jed where waiting.
This track and I have a future, will do this one again with Anthony and Jed, and have some relaxing time at a couple of huts with one or two single malts, and will be fixing a few signs along the way.
Map of Trip
Trip Times
Tuesday 27/12/2016
0912 Left Marahau on water taxi to Totaranui
1123 Left Totaranui,  walking up the Totaranui Road
1304 Pigeon saddle
1400'ish Blister issue
1503 Pigeon Saddle
1654 Awapoto Hut
1725 Left Awapoto Hut
2015 Moa Park Shelter
2026 Left Moa Park Shelter
2115 Castle Rock Hut
Wednesday 28/12/2016
1120 Left Castle Rock Hut
1252 Holyoake Shelter
1434 Marahau
References
Abel Tasman Inland Track
NZ Maps from the past
Hut Procurement Manual For Backcountry Huts - Introduction
Hut Procurement Manual Part A - For 2 Bunk Back Country Huts

A real easy hut bag that you slip in when you are driving from Nelson to Pelorus bridge, just a few kilometers before the bridge; so this is not really a tramping trip. However there was a small walk of about twenty meters.
Parked at the gate and walked down the driveway in the heavy rain, didn't worry about a coat as the walk is real short.
And this is Bill's Kayak Shack, looked through the window and its a bit rough looking. SXhack indeed.
A close up of the name on the hut.
This building looks like a hut, its got a good secure lock on the door and the windows are well protected. Hasn't got a name, just a sign with "Rai Falls Canoe Camp" on it.
And a close up of its sign.

An afternoon day walk to the Orange Hut No. 3 and back from the Whareroa Farm car park. A nice easy stroll up a hill and then on a hydro road to the hut, returned the same way.

Map of Wander
These are exports from Alpine Quest with NZTopo50's loaded. 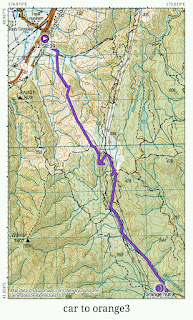 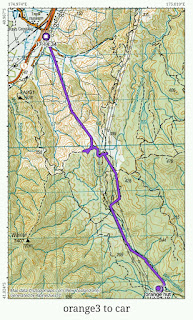