Tariga and I go for an afternoon out to cable bay to climb on the slab. We dropped ropes from the top so no need to put in protection. Had fun climbing the cracks and a bit of the face.
Location Map

The three torch trip. Carl, Paul and I heading for a trip to Upper Travers hut with an aim for Carl and I to climb the South Ridge (5.39 in Ben Winnubst's Kaikoura - Kahurangi guide for climbers).

Friday 11/03/2011
Torch activity caused by Carl, he got himself a new torch and which we picked up and liking it so much we also bought one each. The three torch trip with Petzl TIKKA XP2 headlamps. Collected all members and headed off to Kerr Bay Lake Rotoiti for a 1930 taxi boat up to Coldwater hut. No matter how many times I walk or boat up Lake Rotoiti I always feel I'm heading to my real home. Met up with Callum McLeod, a name that screams good dram, and his excellent taxi boat. Dropped off at Coldwater hut and then we headed off at 1955 into the darkening for Johnnie the Tait. Arrived there at 2253 so it was a quick 2 hour and fifty eight minute walk. Meant we had time for a beer and whisky before bed. 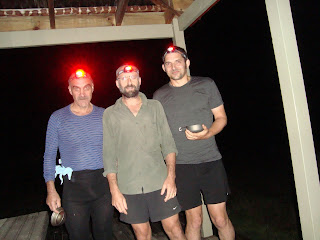 Saturday 12/03/2011
Up and away at 0739 heading for Upper Travers hut, not the sort of day we wanted. Clouds draping the hills and mist in the valley's. Got to Upper Travers at 0931; so it was 1 hour and fifty minutes including stops for jet planes. 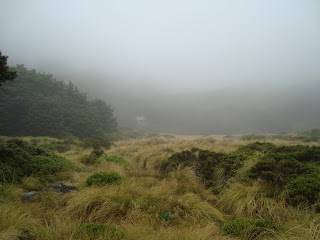 After some food we decided not to climb as it was a bit wet and murky, still needed a walk so we headed off up the saddle for a look around. 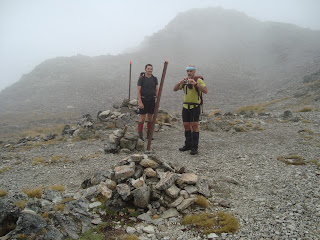 Checked out the Tarn. 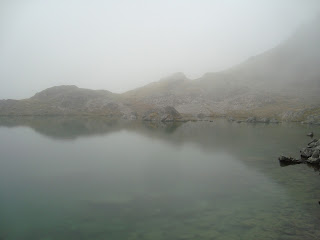 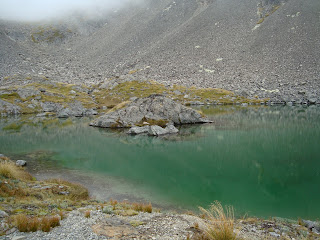 Eventually we finished exploring and wandered back to the hut climbing a few boulders on the way. Enjoyable evening with Ardbeg's Corryvreckan and talking with a couple of fellow trampers, one in his seventies.

Sunday 13/02/2011
We walked out and the day was clear and sunny, a perfect day for a climb. Shit happens. Off down the valley to catch a boat ride at 1400 hours. See lots of chopper activity down near the Cascade turn off and latter learn that a hunter lost his life in the Shift Creek area.
The boat drive then car drive from Coldwater hut jetty to Nelson is a quick journey of a few hours. Home and after we showered we where off to church for several beers and a whisky or two. 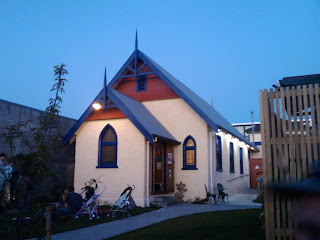 Really it is a place of worship where one goes and pays deep respect to the New Zealand craft beers and those Scottish single malt whisky distillers.
The Freehouse as in free of industrial beer...

Map of the Walk

Density Removal
And on the way up there was no density in the three huts we visited. However as we where on our way out we passed two Americans that looked the type and sure enough there was a little bit of density left in John Tait. Not for long. It is on its way back to where it came from; Gideons International 2900 Lebanon road, Nashville , Tennessee. Let me make a suggestion here. If you are going to travel miles around the world and come to New Zealand, the last thing you should leave in our beautiful back country huts is little vile books. If your coming from Tennessee a bit of bourbon would make us happy.

Daughter Tariga and I drove to Robert Ridge Car park in the Nelson Lakes National Park for a walk into Speargrass hut to have our evening meal, expecting that the last half hour would be in darkness. This walk is a pleasant 2.5 hour walk each way including sight seeing and a rest stop or two. Speargrass hut (rebuilt in 2006) is in a location with light and views as expected from 1000 meters.

Friday 04/03/2011
We left Nelson after five o'clock and drove to Robert Ridge car park above Lake Rotoiti. Left the car at 1838 and off up the Speargrass valley to the hut of the same name for the night.
Walked the last half hour in the dark.
The track seems different from the last time I was here and or the map I'm using is old as we crossed a bridge and I expected another kilometer, not so. Took us approximately two and a half hours.
Saturday 05/03/2011
Woke up to a few periods of heavy rain.
No need for an early start so we stayed in bed until we finished our books.
Good view up Robert Ridge.
Sun in the eyes.
Left the hut at 1139 as the day was getting better, such a blue sky. This is an easy access hut and has good day walks from it, and its a great day trip to Angelus and back. In the October April time its necessary to book Angelus hut, staying at Speargrass for two nights saves that hassle.
What a clean hut none of that jesus rubbish there at all. There was an empty plastic coke botttle with a note to some Israelis.
Map of the Walk 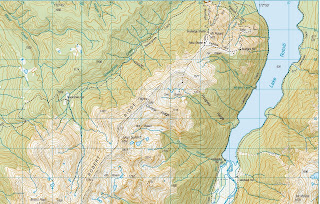