Friday 27/04/2012
This weekends aim is High Ridge. Adrian and I head from Holdsworth car park into a wet night walk to Powell hut. Stop for a wee break at Mountain House shelter. 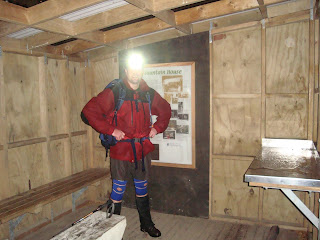 As we got higher we saw a few weta's out on the track, female and male.
And the big native slugs and snails also on the track. Wet nights are good.
Got to the hut and it was empty so we put on dry cloths and had some beer and whisky before sleep.

Saturday 28/04/2012
We left Powell just before midday and headed off up to the High Ridge turnoff. A bit of a damp claggy day.
Got into the sheltered forest where the track is well defined and easy to follow.
And on we went and slowly the weather got a bit better.
Got to an empty Totara Flats hut just before five and set ourselves up for the night.

Anzac day remembrance used for tramp by Carl and I in the Tararuas, by heading off Tuesday night to North Ohau hut and returning on Wednesday the 25th Anzac day. 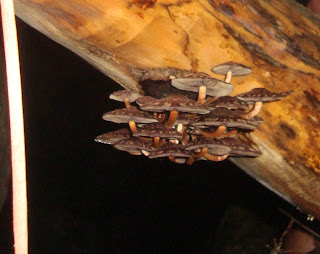 A good night for travel as saw a few eels. 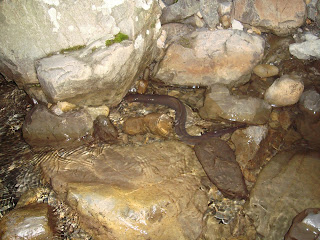 Got to the hut in the first quarter hour of Anzac day, got a fire going, constructed comfy sofa's  and had some beer and whisky to relax with. 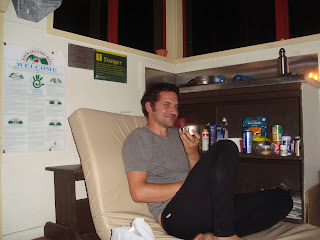 And I got my toes comfy ready for some sleep probably around 0300 hours Wednesday, almost dawn parade time. Thought of the men who enjoyed tramping in the Tararuas and went across the seas and died in a foreign land. There is a sadness there; if mumbo jumbo was part of life their spirits would have been buzzing. 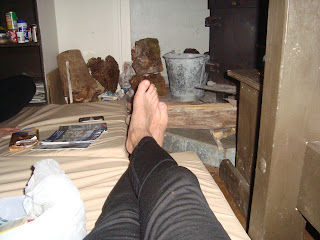 Wednesday 25/04/2012
Out of bed rather late and sluggish and eventually left the hut at half past four, heading back to Poads Road. Got to the car at seven twenty and off home.

A first trip to Hopeless hut for Tariga. As this is one of the huts often discussed at home with friends when we speak of great places to go in Nelson Lakes, and it being of historic importance with Sir Edmund Hillary opening it in 1967.

13/04/2012
Drove off to Lake Rotoiti to meet up with water taxi for a quick trip to Coldwater hut. And then off to Hopeless hut. 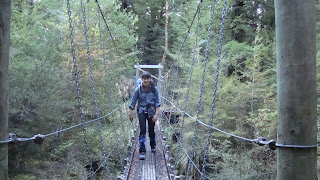 And a bit further on the seat in the park, been there for a few months now. 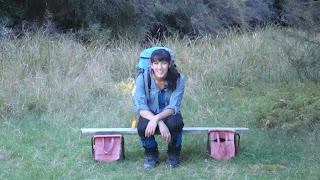 Had to use torches for the last half of the Hopeless track. Nice to get there and as it was a clear crisp evening we cranked the fire up.

14/04/2012
We did not bother to get out of bed until lunchtime when another person arrived. Later we did wish he had never been told by his son about this hut; his snoring all night was like sleeping with a chainsaw.

We went for a day walk up the route to climb Hopeless, at the start there is this big stone. 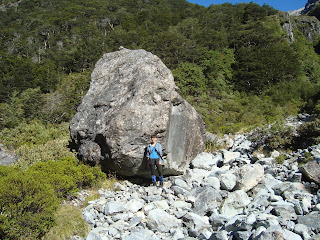 Once above the bluffs it is a nice place to sit and watch the world and enjoy the sunshine. 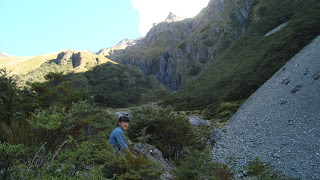 Then it was back to the hut for a night of raucous noise and no sleep. Had to get out of bed and have several slugs of whisky so that I could pass beyond the reach of the chainsaw.

15/04/2012
We did not need to get out of bed early and had a relaxed walk out to Coldwater for a return boat ride to Kerr Bay. 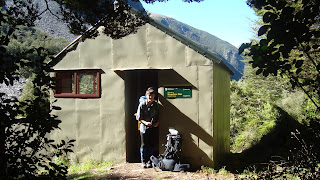 On the way down Hopeless creek we stopped at where the water comes from, the Hopeless spring. 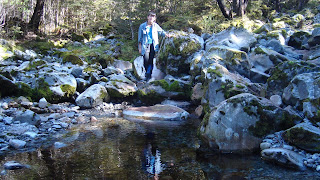 And on the rest of the way out there where several interesting fungi. 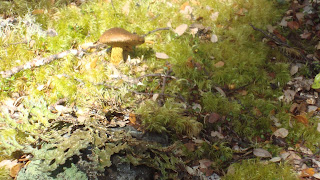 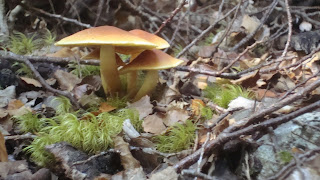 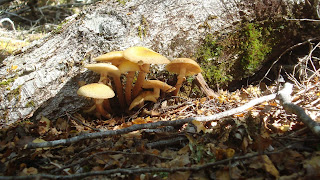 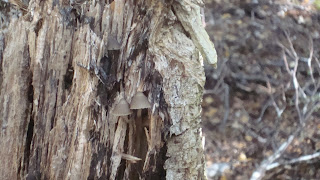 And a last good view looking back at Travers. 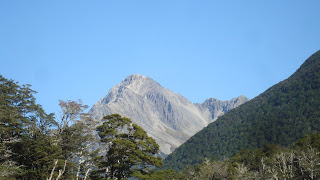 View Larger Topographic Map
Whisky
Had Ardbeg 10yo as the trips whisky.

Carl arrived in Nelson and I picked him up and eventually we drove to Lake Rotoiti much later than expected and got to the lake at about 5.00 p.m. and headed off up Lakehead track soon after.

30/03/2012 Friday
Walked from Kerr Bay to John Tait on Friday night arrived just before 11.00 p.m. taking the Lakehead track. One interesting fungi was out there. Looking good.
Nice bridge just before the turnoff to Hopeless.
Sat out on the verandah for food and beer; so as to minimise the annoyance to those already in bed. But they still came out and asked us to be quiet. We where having a drink and a yak and a laugh about other trips over time, reliving the fun of the past and using that to build the dreams of the future.

31/03/2012 Saturday
Saturday we headed off with full packs as we where thinking of bivving out somewhere up high.
Heading for Upper Travers hut as a lunch stop and to drop a bread crumb before heading on up some ridge. Nice hut nestled there in the trees.
We stopped at the hut for food and drink before heading off up one of the ridges. This is roughly our route.
View looking back down the ridge we came up from Peak 2127.

Mr Carl Hickton on the top of Mt Travers 2012.
Got back to John Tait hut in the dark after a bit of a hectic wander down Summit Creek, seems much more of a bush bash than last time I was here; and last time was in the dark too.

Map showing route up to Travers 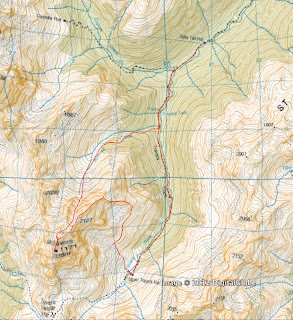