Friday 20/06/2003
1330 Left Nelson with Anthony and drove to the Robert Ridge low car park on Coldwater side. Left packs and Anthony at the car park and then drove car to upper car park. Ran down. Headed off to Coldwater hut. I wore suit and tie all the way.
1600 At Coldwater hut. Food etc.
1710 Ben arrived.

Not everyone one as not everyone had crampons and some had drunk to much alcohol. 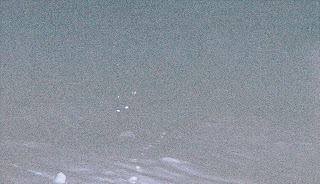 An accident  occurred. We headed off (Andrew, Tony, Nick, Mark, Amanda, and Ian) and I lead the way. It was awesome conditions for crampons. Baby sastrugi type stuff up higher.
We where near the top at 0010 and Nick slid off down a steep slope and went over a bluff. It is shit scarey to see a fellow climber accelerating to their death on a mountain. The noise of the slide and the headlight receding in the distance did not look good.
Andrew and I went down a gulley looking for him, we did find him, but it was initially decided that it was a rock. So me Mark and Amanda headed down. We got to the hut and raised the alarm. No hut radio so some headed off up to Robert Ridge direction where cell phones work to call for assistance. Mark, Grant and I, and a member of another party took up clothing food and hot drink. A cold night grouped around Nick. He was not really ever concious.
In the morning a chopper arrived and after a bit of a struggle with a stretcher he was airlifted to Nelson hospital.  Nick had bad head injuries and a broken Pelvis.

Sunday 22/06/2003
Headed off out eventually with others along Angelus Ridge. Was excellent weather.

NZAC Nelson section, Ben Winubst trip for Queens Birthday weekend with a bunch of us wanting to climb Uwerau.

We on this trip:
Saturday 07/06/2003
Got Paul and headed for coffee at Kaikora. Nice relaxing drive. We meet up with the others and then wandered in to Hapuku Hut up the Hapuku river. Nice hut and nice river valley.

Sunday 08/06/2003
A not so early start as the team negotiated with Ben and we didnt leave the hut until 0545. Here we are heading off for our early morning bush bash, made easier by the previous nights reckie.
Sunrise at whatever time it was.
Ben and Paul happy on the windy chill of a summit.
Map