Friday 27/12/2013
This a cruise to sort some access to some ridges this way and that way and never sure of which way as the wx was not in tune with the requirements of my journey. Heading that way that gets me there and the stones and trees give me the desire to complete some journey. 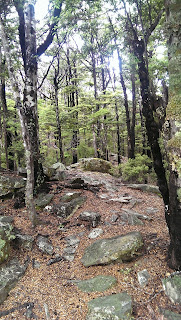 Got there to that Fishtail hut that evening with some visibility to the horizon available. 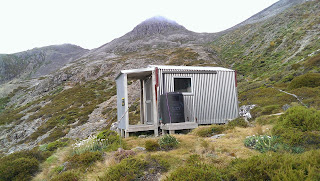 To the hut to the shelter and then there is the Smokehead to know that the shelter is gained.
Saturday 28/12/2013
It stormed it rained it clouded and eventually the next evening it cleared just for a short time. This is what we seen when it cleared looking the way that we came. So off the other way. 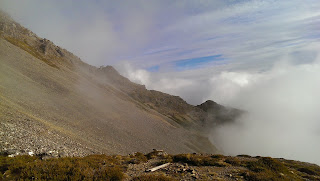 Heading up to the ridge line to a view of the other side and an ability to make a phone call. 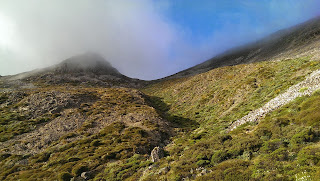 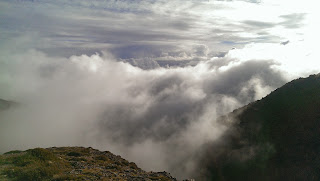 And then back to the hut with blue sky vapor feeding frenzy prior to the rain. 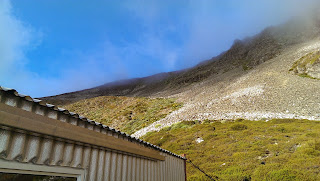 Sunday 29/12/2013
A home wandering day after hours of reading and watching for the weather to change. Stones collected white colored there they lay. 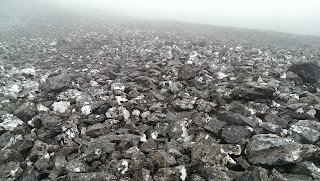 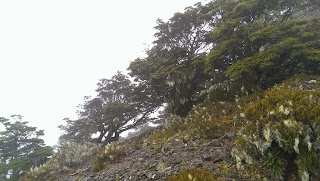 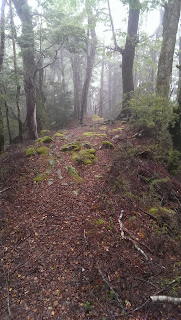 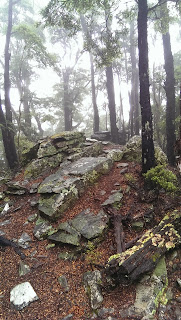 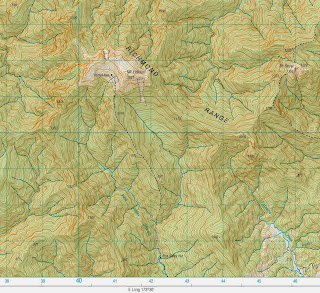 
Friday 6/12/2013
Got a half day off and used the afternoon to drive to Otaki to visit Mum and Dad and then to Otaki Forks car park. Left the car park just before five and by the time I got to Tirotiro Knob cloud was hugging the trees. Stopped at Field for a meal and a density check.
Left Field still in single layer as quite warm, passed a few fellow trampers just before getting onto Table Top. On Table Top with wind increasing and some semi horizontal rain, had to add the coat layer. Got to empty Kime hut before nine, never needed to use a torch. The wind and rain increased over the next few hours. Safe in the shelter of Kime relaxed with a dram and ebook. With the cell coverage here got an updated weather report and it looked good for Saturday afternoon. So loved the weekends whisky that the entire bottle is now empty. The best bottles of whisky always look like this.
There is something magical about fifteen years of age, Springbank rocks, Glendronach rocks, Highland Park does too, Laphroig did when they did a fifteen. My view is that a whisky starts to come into being as a very spiritual dram at this age or later; anything earlier and its just an excessive taste.

Saturday 7/12/2013
Expecting this to be a big day and difficult in the projected storm, or even a pass. Want to head up and over Field Peak, Mt Hector, The Beehives, Atkinson, Dress Circle, Aston, and then head West to Elder hut.

Up early to heavy wind and rain coming and going, decided to sleep until eleven and then make a decision whether to go over the tops and down to Elder. Off after twelve to get to at least Hector and if getting thrown around I would abandon.
So far to Hector it had not been too bad, worst wind was on the top. So decided to continue and then it just steadily got worse, skin battering horizontal rain and wind that had me crawling over the exposed steep bits. Especially between the Beehives and Aitkinson. Really looked forward to getting into the bush on way to Elder. The wind on cone looked like this, ment steadily more gusty but I beat the worst and was at Elder before it got real fast.

After a relax from the wind and rain at Elder (and a density removal) on down to Renata hut to sleep Saturday night, never stayed a night there yet. As I have visited all the huts in the Tararua's bar one (Eastern Hutt emergency hut), and I have slept in them all except Renata, North Mangahoa Biv, and of course the Eastern Hutt one.
Six others already there, still a comfy night as there was more mattress than bunk space and I slept on the floor. Before sleep had a dram of the delicious Springbank 15 year old.


Sunday 8/12/2013
Headed back to Otaki Forks via Waiotauru track. Very fast and easy travel as its a four wheel drive track all the way to the hut. Looks like its been a dumping ground for stolen vehicles. 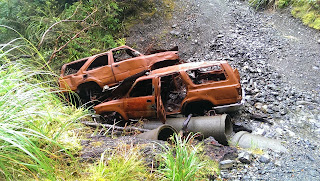 What a dive this hut is, rubbish every where, and no fire box any more! Brushed the rat shit off the table and sat down for a cup of tea and crackers.
I wonder about my shoes, they seem to have done well, even though the side stitching failed a few months ago. It seems a little bit scarey that in the last few years a pair of shoes for tramping only lasts six months to a year and or approx 500 to 800 kilometers before being really worn out.

In 2010 I had a pair that had lasted me almost eight years. The first six years probably only did a few hundred kilometers per year. 2009 and 2010 I did forty weekend trips with them before they where no longer useful.

Solo weekend tramp doing the Bannister loop from Kiriwhakapap Road end. Whisky is a 16 year old Mortlach. A dram that dosn't need the winter cold or a fire going.
Friday 22/11/2013
Left Wellington after food tea and packing my pack. Slow drive over the Rimataka's and got to the road end after ten pm. Headed off in the dark to Cow Creek, scared a deer bout ten minutes from the car park. Was an interesting walk in as there where plenty of snails and weird flat red worms out.
Got to Cow Creek hut after one am, so really this bit of walk finished Saturday.
Saturday 23/11/2013
Initially the day looked slightly cloudy, which is good walking weather. On up to Cow Saddle in ok heat. The Cow sign is starting to look a bit worn.
Is it acceptable to repaint it? Or is it meant to rust away? What is the bush code for bush relics? However by ten thirty as I left the shelter of the bush I was exposed to the full heat of the sun and no breeze. Stifling hot.
The section from Waingawa to Arete is very interesting, there is a two meter step which is easily ascended as there are plenty of hand holds and nice ledges for feet. Then there are good views of Bannister.
From here it was a slow hot two more hours to Arete, where finally I could get some water.
Rested up for an hour at Arete and had some view and packed out the rubbish that David Scoullar had left here. It was an hour to the Waiohine Pinnacles and then another hour and a half to Tarn ridge hut. Must be one of the most enjoyable journies in the Tararua's.
Sunday 24/11/2013
An even better day than yesterday, as I left the hut it was blue sky in the Tararua's and clouds on the edges, and great views. Moon view from the hut.
Clean view down Dorset Ridge.
Great views all over the Tararua's on my way over Girdlestone, Brockett and down Table Ridge.

Finally at the car and can get my shoes off, that was two blistering hot days in the Tararua's, not at all usual.


Map of Trip
Elevation Profiles
The elevation profile is from GPS data and Google Earth. Giving a total gain of 4360 meters and a loss of 4347 meters over the weekend trip.
Density Removal Notice 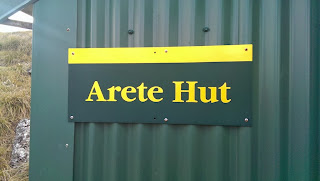