The Nelson area is well known for its good weather and high sunshine hours. So when we saw that the Nelson Lakes Travers range would have several days of cloud with the associated precipitation and winds, Carl, and I headed off to St Arnaud. We aimed to meet up with Anthony at Hopeless hut on Tuesday.

As experienced Tararua trampers we know that the best tramping and climbing is done when there is wet windy cold weather and minimal visibility. None of that sunshine and easy climbing weather for us.

So over the following six days we tested our outer shells, navigation, stamina, and hut etiquette. And this was my first long wander with the sturdy Macpac belay; a roomy 35 liter pack. Awesome sums it up. Just missing out on awesome plus due to the ice axe attachment straps being wrong. Will have too find someone to redo them as the axe sticks out to the sides and when in the bush catches on trees. 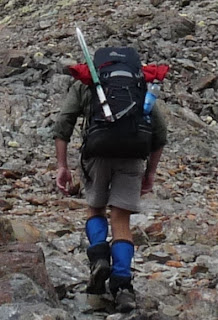 Monday 20/02/2012
This was a late start as otherwise we would have had a really fine day that would have required the use of sun block. We left the top Robert Ridge car park around five pm and walked to Speargrass hut for the night. When we arrived Team Israel had the hut nice and warm; so in keeping with our aims we wandered aimlessly in a swamp behind the hut to ensure we had nice wet feet.
We then returned to the hut and drank our 1.3 liters of beer on the veranda as it was still nice and warm inside. Food and crash completed the evening.

Tuesday 21/02/2012
An early start to the day as we where walking just after eight. Heading into the changing weather for a lunch stop at Angelus Hut. Spooked one shami on the scree about 90 minutes from Speargrass hut.
Got views of the area as we approached Angelus hut.
And on up Angelus via the most interesting way we could find, that being the split buttress rock.

The cloud cleared when we where on Angelus, so got a view of the lake.
Carl found some snow, it was tucked away out of the sun light just waiting for him.
Close to Hopeless hut there was a bumper crop of snow berries, with a wee mushroom popping up amongst them.
And Anthony was there at Hopeless, it had all worked out. Also we meet Ron, an American who had been in the Antarctic.

Wednesday 22/02/2012
Weather changed and it cloudy and wet, Carl and I left last to head out to the Travers track and on up to Cupola where we would meet up with Anthony and Ron.
Got settled in and cranked up the fire. Food and relaxing in the rain. Not to sure about climbing a mountain or two.

Saturday 25/02/2012
Walking out and heading home, just as the weather is getting sorted.
Walking Times

And we wandered onto Cupola and then thru Gunsight to Travers: