Saturday 05/04/2014
Jessie and I left late on a Saturday after we done work, and headed to North Ohau for the night. Just before we got into the river we could hear a deer roaring, noisy beasts, somebody should have shot it. Fully expected the little four bunker to be full and us sleeping out, but no it was empty.
Sunday 06/04/2014
Our Sunday was a a day of off track for most walking and we did some interesting stuff.  Headed up the track behind the toilet, which I call the Toilet track, has a view spot at 760m. We could hear three different deer on the way up. Played compass along the ridge, we did stop for a snack and water at Deception spur, did head on down there a year or so ago with Carl.
Deception Spur turnoff is pretty nice as there is cut and marked track in that area and the jar lids let you know that your somewhere.
From here we kept heading Grid South to Girdlestone saddle and got onto the marked track into the creek that leads to Dowling Falls.
Down the creek we wandered picking up biddy bids and them hook things and bumping into a bit of stinging nettle. Then up out following the OT's to lid junction.
Can see another trip coming on here as I have never headed up here, but can see this ridge would join the track to Te Matawai. Then its back into the creek, this being South Oahu, for about a kilometer down to the hut. We stopped for an hour or so for food tea.
Then on down the river and we got to the track just on dark and had a quick wander back to the cars, hearing the roaring deer in the same spot as Saturday night.
Back to the city for another week of IT. 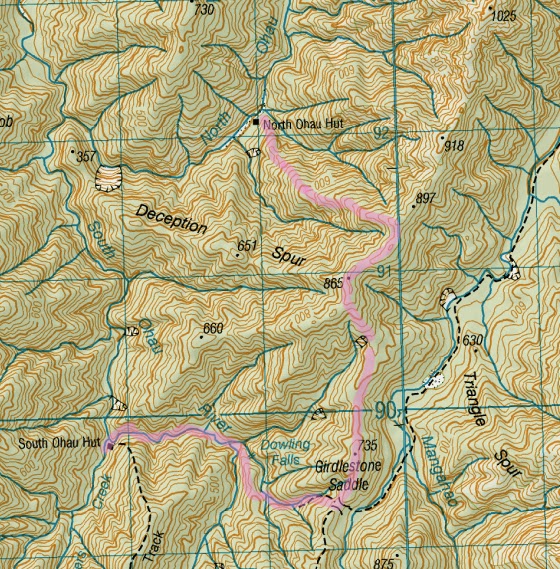 Density
None! What is going on have Seek Freedom dropped the ball? Or is this defeat and the Tararua's are mine.