Hut with No Name Circuit

Lots of the trips I do are more of a lasso than a circuit. Drive to some road end and walk a ways and then its off one way returning another and the trip on a map looks just like a lasso, not a circuit. This is one of the lasso trips. Just a one night'er starting Saturday and finishing Sunday.

Saturday 25/01/2014
Jessie and I met at the start of Kaitoke Waterworks road and we drove in there and parked up near some picnic tables with a sign saying "Norbett Creek Route", but its a nice marked track not a route.
We headed off up that short climb and came out on the 4WD track that leads to the Eastern Hutt river.
Followed it down and at the river Jessie headed back due to prior family stuff and I headed off to the Hutt Forks. Reckon this trip will be done again with a few extra players.
This is a pretty nice spot where the rivers fork and there is a nice deep pool that would be a great swim spot, but its water catchment area. So that is not possible. There is a marked track heading off up Quoin Ridge but the first few hundred meters are steep and have a lot of tree fall, so it was a bit slow going to start with. Its not marked all the way to Alpha but its ridge travel so pretty easy really and as weather was clear, and destination easily viewed compass not needed. Eventually there is a fragile plant zone as advised by chunk of metal signage.
This place is not your normal Tararua's, reminiscent of Cone ridge or more like something South in NW Nelson.
And again...
And on again more up thru the tight forest until this clear area before going up to Quoin.
Then there is the typical Tararua goblin forest to travel through before the open tops.
And out of the bush the views of the open tops unfold.
And something landed and we have this small infestation of alien metal before the top of Quoin. I checked but could not find a USB connection to charge my cell phone on. I think that if some tax funded agency wants to pollute our places with these metal chunks then they should provide some charge (and not coin) for the walkers as we wander by :-).
And finally got the Tararua top views as required by walking and weather. 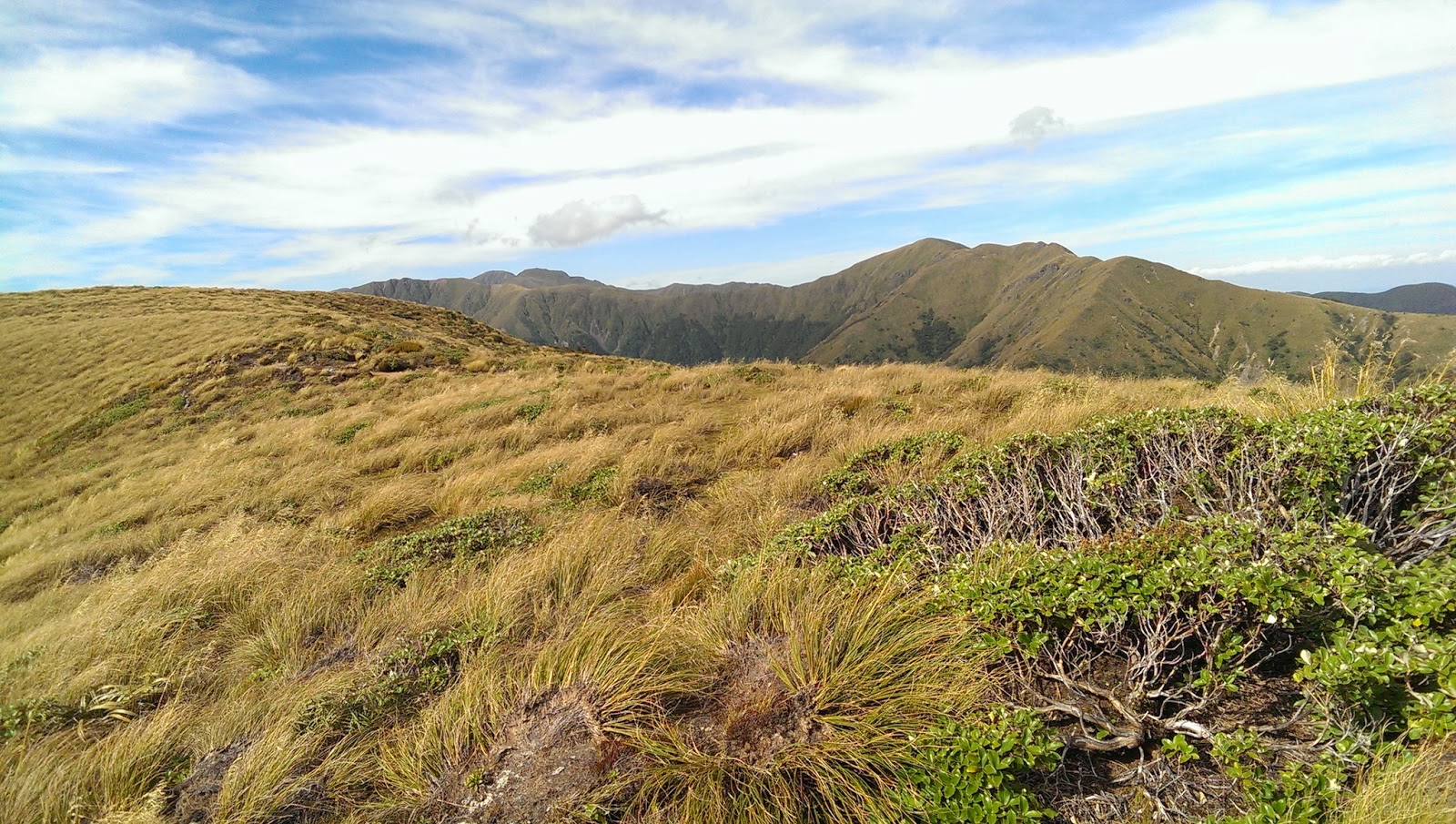 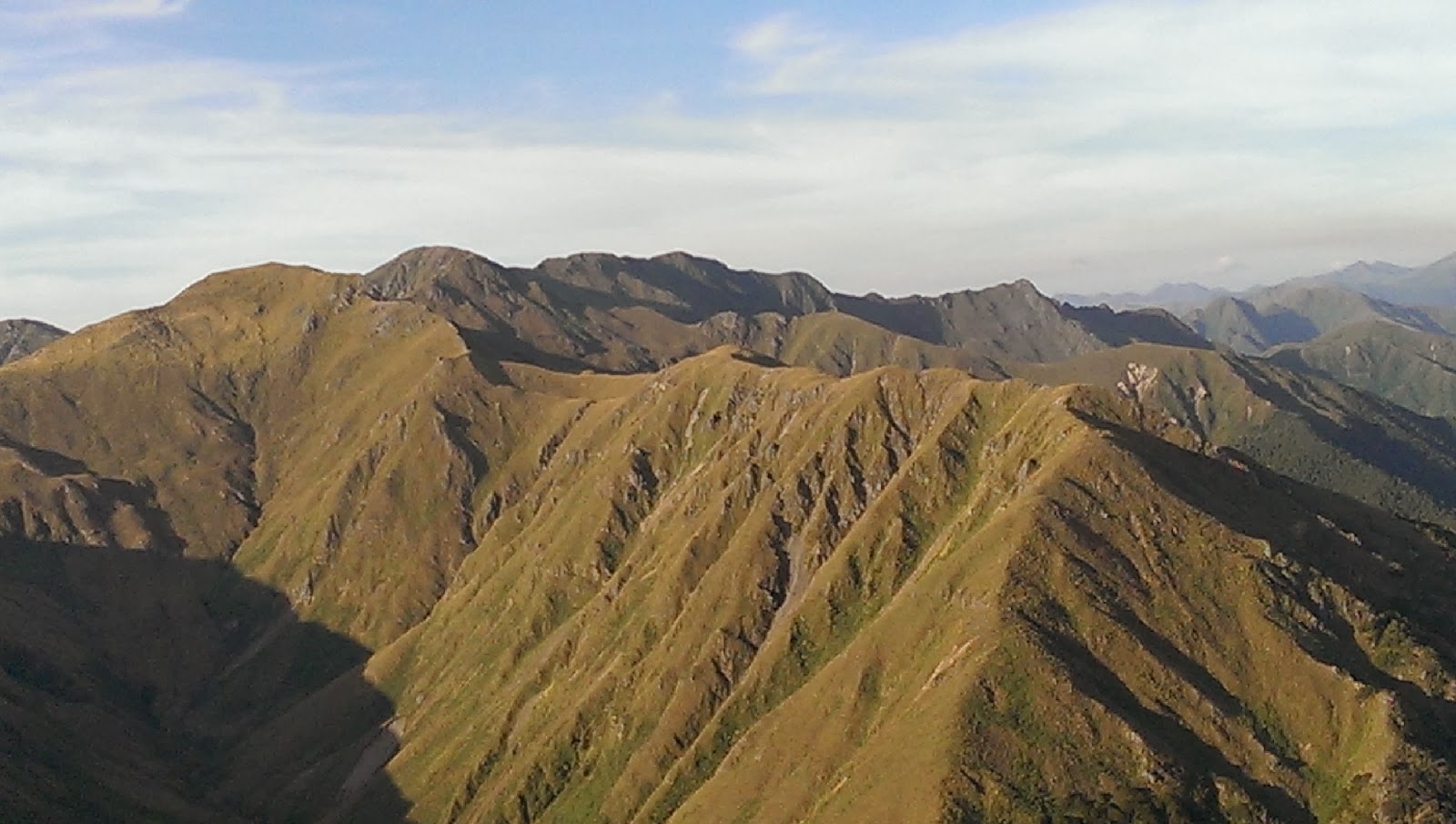 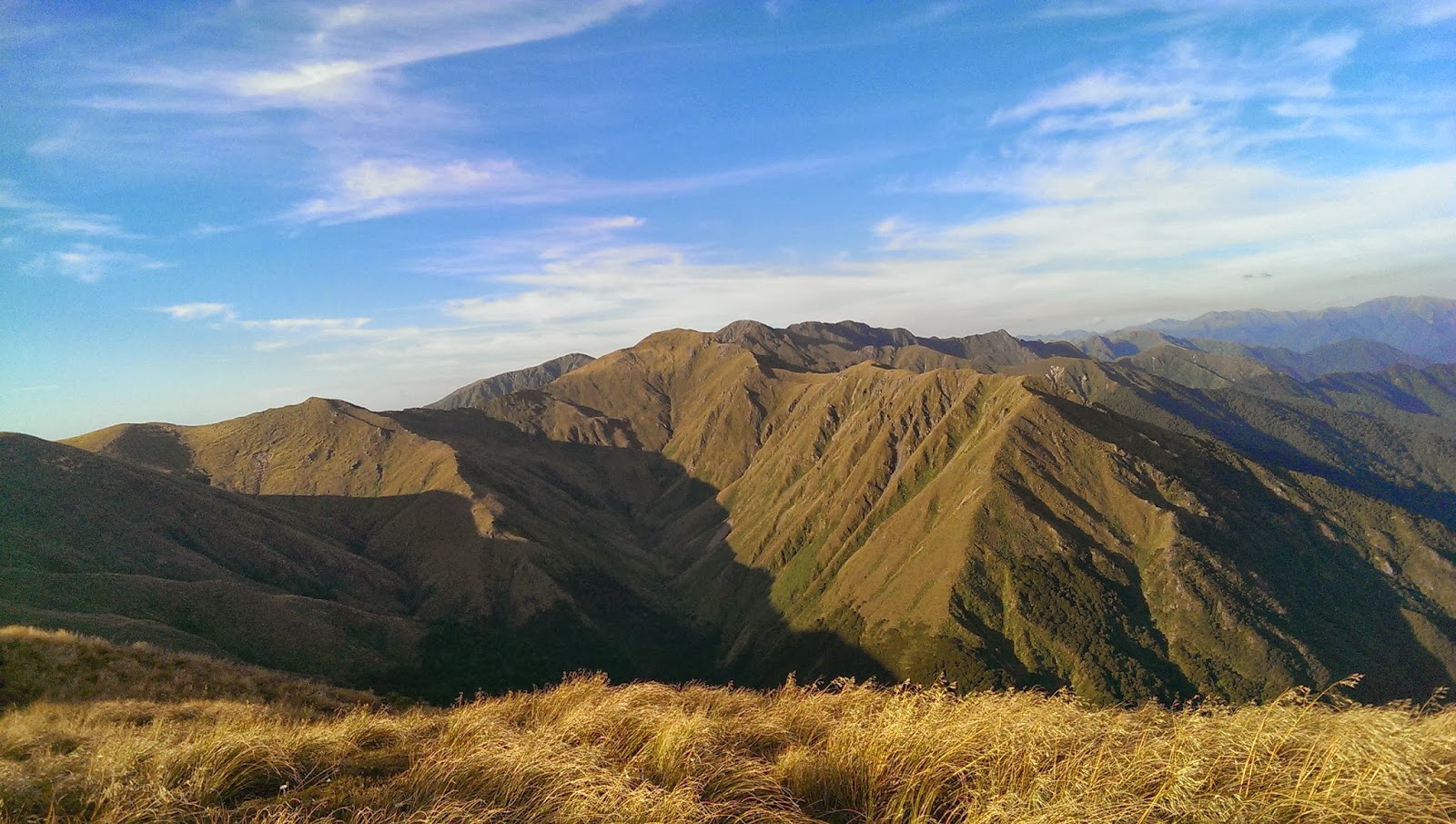 And then it was an easy wander across open tops to join the well formed Southern Crossing track and a short walk to Alpha hut, the destination. Was prepared to bivvy out in the bush expecting a full hut, but just four others there. So an easy food, beer, and sleep.
Sunday 26/01/2014
Woke eventually and waited till the others had left then rose for a nine o'clock breakfast before heading off to Alpha just after ten. The wind speed was on the increase as I headed on up. Once on top had washed views across the tops.
These views are what make me stop walking and sit for a while just to look. There is a cairn at the top of the spur that leads down into the Eastern Hutt river.
Now this spur is a much more interesting walk, unlike Quoin Ridge once I hit bush I lost the ground trail and had no views so it was navigation by compass. Especially in the broad areas. Overall it was nice and open, not bush bashing. Furthur down the ridge you get it narrows and the ground trail is picked up by sticking to the ridge top, and this lead all the way to the river.
The hut with no name, referenced in publications as Eastern Hutt hut, but ain't no signage on the hut is a few minutes downstream once in the water. Its interesting there as there are two hut books, one from 1986 to 2010 and one from 2010 to present.
Here is the first page of the 1986 hut book.
From the hut it is easy travel in the water or on a trail, that's mostly on the true right, to the marked track that takes you up and over bypassing the gorge, to the swing bridge. The marked track starts a few hundred meters before that which is shown on the map. Easy travel back to the car.

An excellent trip much more fun than the over developed and over used tracks like Southern Crossing, navigation skills are more needed doing this walk. Would be fun in a storm.