The weekend plan was to go with Adrian to Neill Forks hut and do more checking out of route down the Hector and over the Hector track. Didn't happen. The amount of snow gave us a slow trip in to Totara flats hut. Never intended to go to Sayers.

Friday 19/08/2011
Got to Holdsworth road end just after 1400 so it was looking like we would easily be at Totara Flats hut before it got dark. We headed off up the hill and hit the soft ankle deep snow and slowed right down. 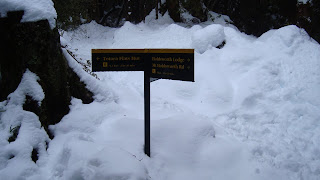 Eventually got to Totara Flats hut and hunted up firewood so we could drink our beer in the warmth.

Saturday 20/08/2011
A lazy out of bed as some others turned up and we where sleeping in front of the fire. Decided we would wander without packs up Cone Ridge and check out the old track. Had some good views of the ranges up on Cone ridge. On our way back down we did follow the old Hector track for a bit and discovered that there are still markers. It will be a hard bush bash as the track has fallen into the river in places and the bush is short and tight.

Got back to the hut and more people arriving. A group of 14 having a stag party.  As each of the stag party members arrived they unloaded supplies from their pack and the table of alcohol grew. 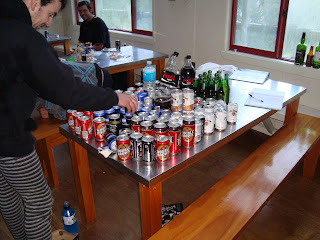 This made some people sad and they did not want to be at Totara Flats hut anymore. So we wandered off to Sayers for the night.