An excellent fine weather weekend where sun tan lotion was required. A trip from Putara road end to Herepai hut on Friday night. Then on Saturday around the tops to Dundas Hut with a side trip to Mt Dundas. Sunday was a return to Putara road end by taking the track down into the Ruamahunga and then up onto Cattle Ridge and down to Roaring Stag and out. Did this trip with some guy.

Friday 25/01/2013
Tried to head away just after work but got stuck in the city due to a couple of bus break downs. Didnt get onto the motor way until after six. Stopped for food in Carterton so it was after eight that we finally headed off to Herepai hut. One big bit of mushroom on the way. 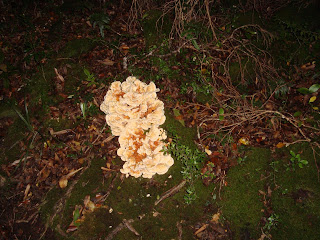 It was a slow walk in, took two hours and normally its thirty minutes quicker. Maybe the track got stretched after the rains. 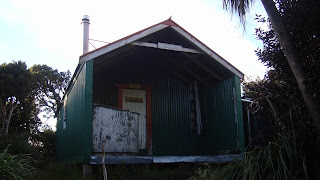 It was a bit hot as we headed up Herepai, but once on top hit a bit of cold wind and cloud started gathering. Feared that the forecast weather was on a change.


Sunday 27/01/2013
Some guy woke me early saying it was time to get out of bed and to head away. He was gone just after six am. I didnt head off until eight. I wanted the sun in the valley so I could have a swim at the first river crossing. Was really a dip as there was no deep pools.

Notes
Removed some rubbish from Roaring Stag, will give it back to Seek Freedom crowd. And there was no whisky for this trip.