This was the third attempt and was an easy wander due to the exceptionally good weather.

Friday 18/01/2013
Drove to Poads Road end and just before 8pm headed up the South Ohau river to the South Ohau hut, getting there sometime before 11pm, the river being up slightly made the going a bit slow. As there where people at the hut went straight to bed.

Saturday 19/01/2013
Got out of bed once the party of older trampers had headed off and yarned to Pete, who got a young stag up Butchers the previous evening.

Sometime later headed off up Dowling Falls to Girdlestone Saddle and then down the Mangahao track. Stopped at the pool where a creek joins the Mangahao for lunch. 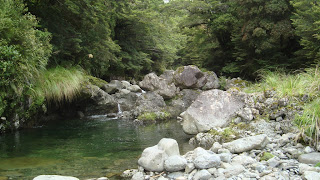 Then off down to Mangahao Flats hut. Got there about 3pm and was worried that the hut would be full. Stupid worry as there was no one there. Much later another couple arrived.

Rained a bit in the evening.

Sunday 20/01/2013
Left the hut and headed off up the Mangahao for the Triangle Spur, a "Track Not Maintained". The track however is still easy to follow with just a few minor bits of tree fall. No real bush bashing at all. Its surprising how clear the track is after a few decades of no maintainence.

The worst bit was getting a few scratches pushing thru the leather wood. Strange conditions in the open as barely could see Dundas due to clag, it looked clear further South. 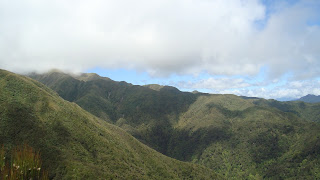 Had lunch at Dundas trig and then carried onto Arete, used compass to ensure I went the correct way a few times as the clag killed visibility at times. No wind, not cold, was a real hot day. Nice flowers about. 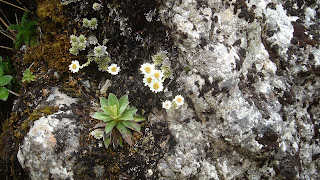 Signed hut book at Arete where three people where hanging out and continued to Te Matawai for the night.

Monday 21/01/2013
A very hot clear day. Went down to South Ohau hut for a snack and meet some more people on there way out. Had a slow walk out down the Ohau stopping for a few swims. Twice in the rapids saw fast moving fish, not trout. These ones where out getting some sun. 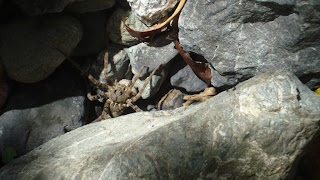